The subtitled last few minutes of a Jazeera Arabic interview with the great Palestinian thinker, in which Azmi expresses his disgust with those who fail to recognise the incredible revolutionary spirit of the Syrian people.  “The Syrian people are the ones who turned out to be strong!” he exclaims. “An admirable, heroic, great people! In the face of planes and tanks and artillery. I salute the people of al-Qusair! … This is what we ought to be impressed by!”

The great Palestinian philosopher and former MK Azmi Bishara on the Syrian revolution.

1) Let’s suppose that impoverishment of the people and the suppression of their freedoms are marginal when placed in the context of a grander goal, such as defending the homeland. That would only make sense, however, during limited periods of time, such as during wars. Anyway, such claims do not justify the way in which the people have to share out the misery between them, while the rulers enjoy the riches. Nor does such sloganeering justify the institutionalized, systematic denial of the rights of their people. There is no justification for the tyranny and corruption of the rulers, and their appropriation of the fruits of the masses’ labour. Trying to exploit a cause held dearly by both the people and the regime to achieve this is the beginning of demagoguery, and it is a tool used solely to preserve the existence of the corrupt, tyrannical regime. None of this, of course, takes away from the righteousness of the cause being exploited, but it does serve to bestow legitimacy on an illegitimate regime. Rebellion against this tyranny will necessarily place the removal of that regime as its first target, but the sanctity of the just causes which the regime exploits must also be preserved. This applies when the question comes to US plans to dominate our region, seeking to design the policies of Arab states with Israeli interests at heart, as well as the question of Palestine and the duty to resist the occupation at every turn.

2) No people, anywhere in the world, would accept torture, false imprisonment, financial corruption and the muzzling of the media for generation after generation, regardless of the justification. Nor does anybody to have the right that those being persecuted remain quiet for the sake of grander concerns, without hopes for a change, all to placate commentators who seem to think that the suffering of the people is secondary to the “Central Question”, especially as all the evidence that no progress on that same “Central Question” in the first place.

END_OF_DOCUMENT_TOKEN_TO_BE_REPLACED

This is an edited translation from Azmi Bishara’s Arabic facebook page. 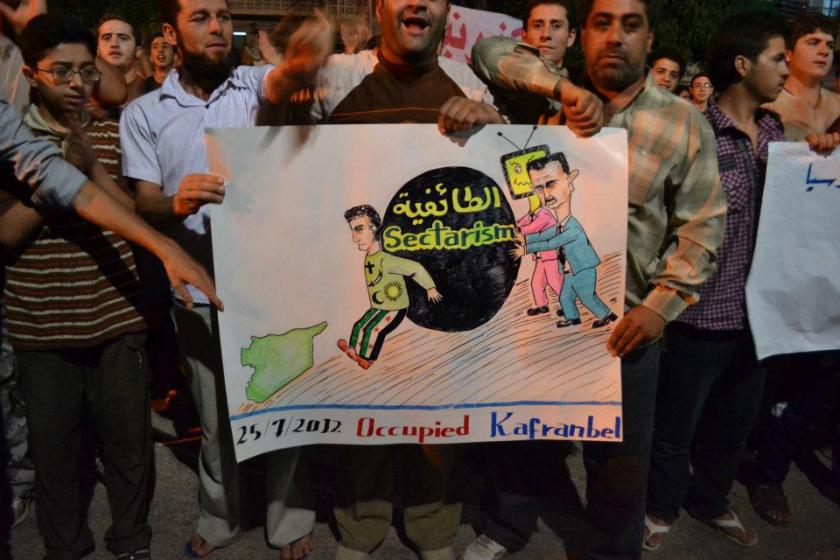 1) After a legendary show of resistance in the face of an unprecedented onslaught of savagery, the Syrian revolutionaries can now almost touch their main aim: a change of regime. As I have said elsewhere, a lack of wisdom at this stage could lead to a complete destruction of the very country of Syria.

2) This progress would not have been made without the sacrifices of millions of Syrians, and tens of thousands of the armed rebels. Yet it must be said that some of the members of these armed groups used the opportunity to carry out personal vendettas, and others are clearly infiltrators into the Syrian cause. It is patently clear that foreign operatives have exploited the revolutionaries’ needs for financial and logistical support, not to mention their understandable grievances against the regime, to try and effect the course of events. In this regard, the assassinations of six Syrian scientists (including a missile expert) is a threatening development. The same can be said of the attempts of Iraqi Kurdish leader Masoud Barzani to try and control some of the Kurdish-populated areas of Syria; bear in mind that the Syrian Kurds’ National Council is now well armed, whilst not having taken part in the revolution itself. We cannot assume that the Israelis and the CIA will stand backk and just watch. (Put another way: was the removal of the former head of the Saudi Arabian intelligence service a mere coincidence?) The recent statements made by Israeli and American statesmen on the question of Syria’s chemical weapons is to be taken seriously: their efforts are already underway. Anybody who doesn’t understand this point, clearly does not understand the way in which world powers and their regional counterparts attempt to achieve their aims, and does not understand the reality of the enmity [between the Israelis and the other countries in the region], nor does that person understand the strategic significance of Syria.

END_OF_DOCUMENT_TOKEN_TO_BE_REPLACED

‘Any recourse to international law in seeking to bring Israeli officials to book must be carefully considered,’ writes Azmi Bishara.

It is not my intention to discuss the definitions of resistance, the legitimacy of resistance or the laws of war in general. Nor will I delve into the definition of war crimes, the relevant articles in international conventions, the jurisdiction of the International Criminal Court, the duties and obligations of its member states, the powers of its prosecutor and the difference between this court and those that were established for the prosecution of war crimes and crimes against humanity in specific countries, such as the International Criminal Tribunal for former Yugoslavia. All these subjects have been treated extensively in numerous other publications. My purpose here is to shed light on some possibly unfamiliar aspects of the notion of appealing to this form of international arbitration.

All such tribunals and conventions have derived their impetus from the will on the part of powerful nations to bring war criminals to account and from the ability of these powerful sovereign nations not only to draw up the law but to put it into effect when they want. Given this, it is fundamentally erroneous to liken international law to the rule of law in sovereign countries. International law does not prevail internationally, is not applied around the globe as though the world was a single sovereign country, and has no executive authority to put it into effect apart from powerful nations. It is thus subject to political aims and interests. Above all, the principle of equality before the law that applies in democratic countries does not exist in international law, either practically or theoretically.