by Kathy Kelly and the Afghan Youth Peace Volunteers

Kabul – Bibi Sadia and her husband Baba share a humble home with their son, his wife and their two little children. An Afghan human rights advocate suggested that we listen to Bibi’s stories and learn more about how a Pashto family has tried to survive successive tragedies in Kabul.

Holding her three year old granddaughter in her arms, Bibi adjusted her hijab and launched into a narrative that began during the Soviet occupation.  The mujahideen had asked Baba to bring them medicines two or three times a week for those injured in the war. For each batch of medicines that Baba delivered, the mujahideen paid him a small sum of money. When the Russian occupiers discovered what he was doing, they beat him severely.  After that, the mujahideen accused him of spying for the Russians and they also beat him badly.

They also left him mentally unsound, so that Bibi became the sole breadwinner for the family.  “During the time of the Taliban,” Bibi tells us with a soft smile, “I used to make bread, wash clothes and reap other people’s wheat to earn a living,” The mujahideen, having ousted Russia’s favored government and its army, were now in power and frowned on women working.  “I used to work by the moonlight, sewing clothes from animal hide”.

END_OF_DOCUMENT_TOKEN_TO_BE_REPLACED

In the commentary on the tenth anniversary of 9/11, the news and infotainment media have predictably framed the discussion by the question of how successful the CIA and the military have been in destroying al Qaeda. Absent from the torrent of opinion and analysis was any mention of how the U.S. military occupation of Muslim lands and wars that continue to kill Muslim civilians fuel jihadist sentiment that will keep the threat of terrorism high for many years to come.

The failure to have that discussion is not an accident. In December 2007, at a conference in Washington, D.C. on al Qaeda, former State Department Coordinator for Counterterrorism Daniel Benjamin offered a laundry list of things the United States could do to reduce the threat from al Qaeda. But he said nothing about the most important thing to be done: pledging to the Islamic world that the United States would pull its military forces out of Afghanistan and Iraq and end its warfare against those in Islamic countries resisting U.S. military presence.

During the coffee break, I asked him whether that item should have been on his list. “You’re right,” he answered.  And then he added, “But we can’t do that.”

“Because,” he said, “we would have to tell the families of the soldiers who have died in those wars that their loved ones died in vain.”

His explanation was obviously bogus. But in agreeing that America’s continuing wars actually increase the risk of terrorism against the United States, Benjamin was merely reflecting the conclusions that the intelligence and counter-terrorism communities had already reached.

END_OF_DOCUMENT_TOKEN_TO_BE_REPLACED

It’s a bit odd to me that with my sense of geographical direction I’m ever regarded as a leader to guide groups in foreign travel.  I’m recalling a steaming hot night in Lahore, Pakistan when Josh Brollier and I, having enjoyed a lengthy dinner with Lahore University students, needed to head back to the guest lodgings graciously provided us by a headmaster of the Garrison School for Boys.  We had boarded a rickshaw, but the driver had soon become terribly lost and with my spotty sense of direction and my complete ignorance of Urdu, I couldn’t be any help. My cell phone was out of juice, and I was uncertain anyway of the needed phone number. I bumped and jostled in the back seat of the rickshaw, next to Josh, as we embarked on a nightmare of travel over unpaved, rutted roads in dizzying traffic until finally the rickshaw driver spotted a sign belonging to our school – the wrong campus, we all knew – and eager to unload us, roused the inhabitants and hustled us and our bags into the street before moving on.

We stood inside the gate, staring blankly at a family that had been sound asleep on cots in the courtyard.  In no time, the father of the family scooped up his two children, gently moving them to the cot he shared with his wife so that Josh and I would have a cot on which to sit.  Then he and his spouse disappeared into their humble living quarters. He reappeared with a fan and an extension cord, wanting to give us some relief from the blistering night heat.  His wife emerged carrying a glass of tea for each of us.  They didn’t know us from Adam’s house cat, but they were treating us as family – the celebrated but always astonishing hospitality that we’d encountered in the region so many times before.  Eventually, we established with our host that we were indeed at the wrong campus, upon which he called the family that had been nervously waiting for our errant selves.

This courtyard scene of startling hospitality would return to my mind when we all learned of the U.S. Joint Special Operations (JSO) Force night raid in the Nangarhar province, on May 12, 2011. No matter which side of the Afghanistan/Pakistan border you are on, suffocating hot temperatures prevail day and night during these hot months.  It’s normal for people to sleep in their courtyards.  How could anyone living in the region not know this?  Yet the U.S. JSO forces that came in the middle of the night to the home of a 12 year old girl, Nilofer, who had been asleep on her cot in the courtyard, began their raid by throwing a grenade into the courtyard, landing at Nilofer’s head.  She died instantly.  Nilofer’s uncle raced into the courtyard. He worked with the Afghan Local Police, and they had told him not to join that night’s patrol because he didn’t know much about the village they would go to, so he had instead gone to his brother’s home.  When he heard the grenade explode, he may well have presumed the Taliban were attacking the home.  U.S. troops killed him as soon as they saw him.  Later, NATO issued an apology.

END_OF_DOCUMENT_TOKEN_TO_BE_REPLACED 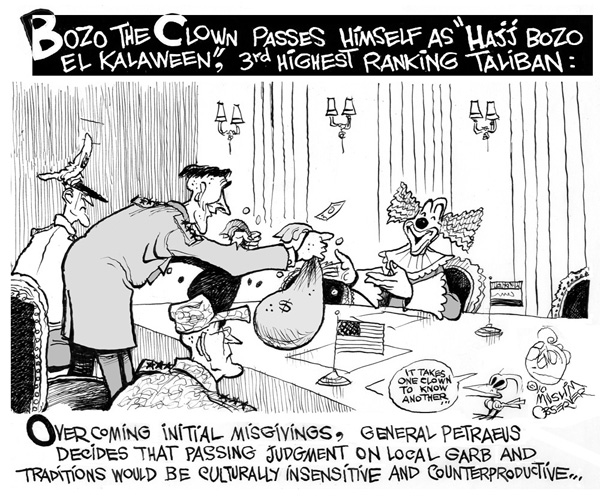 Kabul– Khamad Jan, age 22, remembers that, as a youngster, he was a good student who enjoyed studying.  “Now, I can’t seem to think,” he said sadly, looking at the ground.  There was a long pause. “War does this to your mind.”

He and his family fled their village when Taliban forces began to attack the area. Bamiyan Province is home to a great number of Hazara families, and Khamad Jan’s is one of them. Traditionally, other Afghan ethnic groups have discriminated against Hazaras, regarding them as descendants of Mongolian tribes and therefore inferior.

During the Taliban attacks, Khamad Jan’s father was captured and killed.  As the eldest, Khamad Jan bore responsibility to help provide for his mother, two brothers and two sisters. But he struggled with debilitating depression, so much so that villagers, anxious to help, talked of exorcism. One day, he said he felt ready to give up on life.  Fortunately, community members and his friends in a local youth group, the “Afghan Youth Peace Volunteers,” have helped him come to terms with the pain he feels, assuring him that he can find a meaningful future.

Khamad Jan’s village is a particularly hard place in which to build houses, roads or farms. He and his family own a small plot of land which produces potatoes and wheat. The family works hard, but they only grow enough to feed themselves for seven months of the year. For a few months of every year, they must depend heavily on bread and potatoes, a carbo-diet which leads to malnutrition.  Like other women in the village, Khamad Jan’s mother and sisters are chronically anemic, suffering from headaches and leg cramps.

END_OF_DOCUMENT_TOKEN_TO_BE_REPLACED

by Kathy Kelly and Josh Brollier

For six days in late May, 2010, Emergency, an Italian NGO providing surgery and basic health care in Afghanistan since 1999, welcomed us to visit facilities they operate in the capital city of Kabul and in Panjshir, a neighboring province. We lived with their hospital staff at both places and accompanied them in their weekly trips to various FAPs (First Aid Posts) which the hospitals maintain in small outlying villages.

One morning, accompanying a field officer from the Kabul hospital, we pulled off of the main road and traveled over unpaved lanes, then walked a short distance to a shady grove outside a small Afghan village. Villagers, eager to welcome Emergency’s staff and drivers, served ripe mulberries and a salty cucumber yogurt drink. We sat in a circle, shaded by the trees. When breezes stirred the branches, we’d enjoy a momentary rain of mulberries, much to the amusement of little children nearby.

END_OF_DOCUMENT_TOKEN_TO_BE_REPLACED

From The Nation’s press release (You can watch Democracy Now’s interview with Jeremy Scahill here):

In a stunning investigation just posted at TheNation.com, Jeremy Scahill reveals a covert military operation being run almost entirely by Blackwater, USA, a military contractor embroiled in controversy for their actions in Iraq and the Middle East. Key points from the piece:

END_OF_DOCUMENT_TOKEN_TO_BE_REPLACED

Yesterday five British soldiers were shot dead by an Afghan policeman. Just as they keep promising that they’ve reached ‘decisive turning points’ in their battle with the Afghan resistance, British military officials immediately vowed that the ‘rogue’ policeman would be caught. Today the Taliban reports that the policeman is safe with them, and that he’s been greeted with flowers.

Our glorious patriotic press responds. Amusingly, the Daily Mail headline wrings its hands and squawks, “What kind of war IS this?” Because some people aren’t playing by the rules, you see. Instead of sitting quietly in their villages waiting for the drone attack, or perhaps sending their kids out to accept sweets and modernity from a rosy-cheeked English lad, some barbarians are actually shooting back at the invaders. How very unBritish. (To be fair to the Mail – which has never been fair to anyone – it does seem to be taking an anti-war stance today). Other sections of the media worry about the ‘loyalty’ of Afghan troops, as if love for foreign occupiers is a realistic standard of loyalty. Still others, even more clever, psychoanalyse the policeman, wondering if an argument with his commander pushed him to a moment of madness. But it really isn’t that complicated, as anybody who disabuses themselves of imperialist delusion can see. Very simply, people don’t like foreigners striding around their streets and fields with guns and assumptions of superiority. Afghans will kill British troops as surely as Britons would kill Afghan troops if they occupied this country.

END_OF_DOCUMENT_TOKEN_TO_BE_REPLACED

The Guardian reports on British campaigning in Afghanistan, specifically an “operation” which “took nearly 3,000 British troops, many engaged in gun battles, to capture an area the size of the Isle of Wight.” I do wonder what meaning the verb ‘capture’ has here.

The article relays stories told by “British officials” and a couple of named officers, stirring stories which involve “a risky air attack” and a “Taliban drugs bazaar.” Twenty two British soldiers have been killed in Helmand province this month alone, so I expect our officials are thinking very hard indeed about the stories they tell. The recent adventure is called ‘Operation Panther’s Claw’, and is hoped to be “a decisive turning point in the eight-year conflict.”

We shall see. In the meantime, what seems a potentially decisive sign is the language and direction of this Taliban ‘code of conduct’. It demonstrates not only a higher stage of organisation than at any time since the movement’s 2001 defeat, but also a leap forward in ethics and political understanding.

On suicide bombing, the code says

(These) attacks should only be used on high and important targets. A brave son of Islam should not be used for lower and useless targets. The utmost effort should be made to avoid civilian casualties.