Below are some final shots from William Parry, UK-based photojournalist who, with the help of projection artist Beverley Carpenter, has spent the last several days projecting images of Israel’s apartheid wall onto buildings and monuments in London. The projected images were taken by Parry in Bethlehem, where children from the Aida refugee camp stenciled a Christmas message to the world onto their section of the wall. The goal of the project: to raise awareness of the Israeli-induced suffering that continues in Bethlehem, exploiting the city’s relevance to the current holiday, and in Palestine as a whole. (For more background and the first two sets of Parry’s photographs from Bethlehem and London, click here and here.)

Writes Parry in an email to PULSE:

It was a magnificent project to have been part of. Working with the kids from Aida camp on cutting out the stencils and then watching them put their message up on the wall was huge fun and it was great to see them enjoying themselves. But then coming to London and actually seeing the photos of these kids and their simple message on London’s walls — and some of the city’s prime wall spaces — was absolutely brilliant, really moving. Then to have the public’s interaction here with that message and with the images from Bethlehem, that just added to the fulfillment. Bev did a great job as our ‘guerrilla’ projection artist.

As you’d expect, a huge number of people — most, in fact — were more focused on and panicked by the ever-dwindling number of shopping hours ahead of them and so were oblivious, but a lot of people stopped to talk about it. Most were unaware of the situation [in Palestine] or of what Bethlehem even looks like. It certainly gave us a lot of ideas about creative ways in which we can bring the reality there to the public here and engage with them in a constructive and creative way.”

Parry is moved by the support for the project that has been generated on PULSE and on Facebook, and expresses his gratitude to everyone that helped make it possible.

New photographs from the Wellington Monument at Hyde Park Corner and from trendy Charlotte Street, where Parry’s group was reportedly unpopular among restaurant managers: 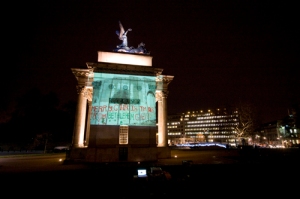 William Parry is a freelance photojournalist and author of Against the Wall: the art of resistance in Palestine, published in July by Pluto Press.