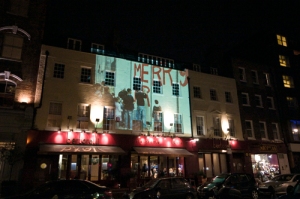 Below are some final shots from William Parry, UK-based photojournalist who, with the help of projection artist Beverley Carpenter, has spent the last several days projecting images of Israel’s apartheid wall onto buildings and monuments in London. The projected images were taken by Parry in Bethlehem, where children from the Aida refugee camp stenciled a Christmas message to the world onto their section of the wall. The goal of the project: to raise awareness of the Israeli-induced suffering that continues in Bethlehem, exploiting the city’s relevance to the current holiday, and in Palestine as a whole. (For more background and the first two sets of Parry’s photographs from Bethlehem and London, click here and here.)

Writes Parry in an email to PULSE:

It was a magnificent project to have been part of. Working with the kids from Aida camp on cutting out the stencils and then watching them put their message up on the wall was huge fun and it was great to see them enjoying themselves. But then coming to London and actually seeing the photos of these kids and their simple message on London’s walls — and some of the city’s prime wall spaces — was absolutely brilliant, really moving. Then to have the public’s interaction here with that message and with the images from Bethlehem, that just added to the fulfillment. Bev did a great job as our ‘guerrilla’ projection artist.

END_OF_DOCUMENT_TOKEN_TO_BE_REPLACED

Yesterday we wrote about photojournalist William Parry’s Christmastime project in London: projecting images of Israel’s apartheid wall in Bethlehem onto monuments and buildings in the British capital.

The goal, says Parry, is to “provide a stark political backdrop to the frantic Christmas shopping rush, to remind Britain and the West that Israel’s illegal occupation and separation wall are strangling Bethlehem – and Palestine – the birthplace of Christ and Christmas.”

The images used in the projections are primarily of Palestinian children from the Aida refugee camp who have decorated a portion of the wall with a Christmas message to the world. Click here for yesterday’s overview of the project and to see the original images taken by Parry in Bethlehem.

Over the fold are pictures from last night’s projections at Marble Arch, the National Portrait Gallery, and Parliament, where Parry reports his group was nearly arrested.

END_OF_DOCUMENT_TOKEN_TO_BE_REPLACED

Two dozen children, aged 5-17, from the Aida refugee camp in Bethlehem, cut out stencils of letters, stars and Christmas trees and sprayed painted ‘MERRY CHRISTMAS WORLD FROM BETHLEHEM GHETTO’ on Israel’s illegal separation wall. Photographed by UK-based photojournalist William Parry, images of the children and their message – along with powerful images of checkpoints and life under occupation – will temporarily ‘hijack’ prominent wall spaces in central London throughout the week leading up to Christmas, with the help of projection artist, Beverley Carpenter. (photographs of Bethlehem and of the projection project in London can be found over the fold!)

The idea is to provide a stark political backdrop to the frantic Christmas shopping rush, to remind Britain and the West that Israel’s illegal occupation and separation wall are strangling Bethlehem – and Palestine – the birthplace of Christ and Christmas. We’re bringing the reality of Bethlehem to London this Christmas.

The children who painted the message on the wall are third and fourth generation refugees, at risk of being made refugees again because of the wall’s devastating impact. We are complicit in suspending their rights to justice and freedom through our governments’ biased support of Israel.”