My latest for Guernica Magazine. 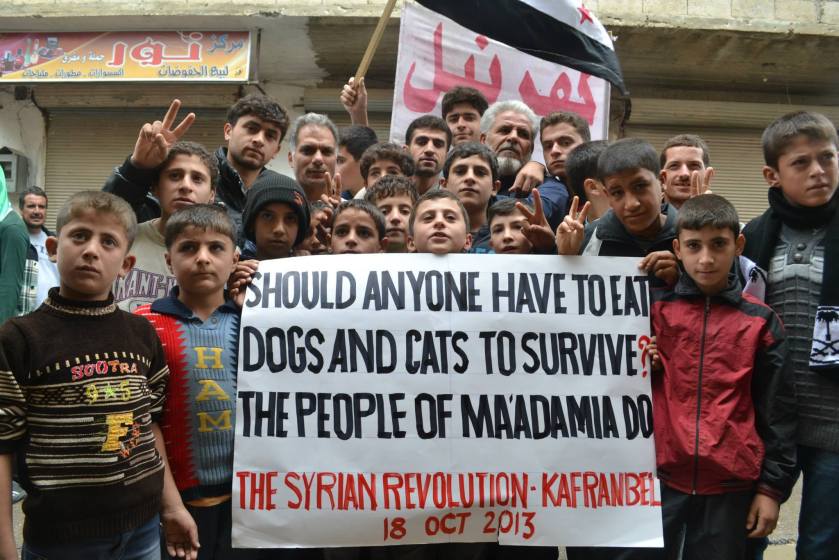 Earlier this month, the British street artist Banksy produced a video on Syria that attracted over five million viewers in three days. At a time of intensifying state repression, the target of Bansky’s satire was not the regime in Damascus but its opponents.  By contrast, the most watched video from the chemical attack in August, showing a traumatized young survivor, managed only half a million hits in over a month.

Six weeks after the attacks on Ghouta that killed hundreds of civilians, regime forces have choked off food supplies to the targeted neighborhoods. Survivors of the chemical attack are now facing the threat of starvation. Children have been reduced to eating leaves; and clerics have issued fatwas allowing people to eat cats and dogs.

The belated discovery of the Syrian conflict by “anti-imperialists” after the US government threatened war inspired impassioned commentary. The strangulation of its vulnerable population has occasioned silence. But dog whistles from issue-surfing provocateurs like Banksy are unexceptional; they merit closer scrutiny when they come from respected essayists like David Bromwich.

In a recent front-page article for the London Review of Books, Bromwich identifies many rogues in the Syrian drama: Barack Obama, John Kerry, Saudi Arabia, Qatar, “the jihadists”.  But conspicuously absent is Assad’s Baathist regime. Vladimir Putin is the closest Bromwich admits to a hero. The Syrian people are denied even a cameo.

END_OF_DOCUMENT_TOKEN_TO_BE_REPLACED

PUMPKIN: Everybody be cool, this is an occupation!
YOLANDA: Any of you fucking pricks move, and I’ll execute every motherfucking last one of you!
JULES: So, tell me again about those killing-for-promotions there…

PUMPKIN: Everybody be cool, this is an occupation!
YOLANDA: Any of you fucking pricks move, and I’ll execute every motherfucking last one of you!
JULES: So, tell me again about those killing-for-promotions there…
VINCENT: What do you want to know?
JULES: Killing is legal there, right?
VINCENT: Yeah, it is legal but it ain’t 100% legal. I mean you can’t walk into a house and start shooting right away. You’re only supposed to take those fucking pricks to certain designated places and blast off their fucking brains? You have to give them some name…
JUKES: Those are encounter sites?
VINCENT: Yeah, it breaks down like this: it’s legal to kill them, it’s legal to own it and, if you’re the occupier of the encounter site, it’s legal to bury them there. It’s legal to carry their bodies, but that doesn’t really matter ’cause — even if you got a truckload of them — if the cops stop you, it’s illegal for them to search you. Searching you is a right that the cops in Kashmir don’t have. END_OF_DOCUMENT_TOKEN_TO_BE_REPLACED

Two dozen children, aged 5-17, from the Aida refugee camp in Bethlehem, cut out stencils of letters, stars and Christmas trees and sprayed painted ‘MERRY CHRISTMAS WORLD FROM BETHLEHEM GHETTO’ on Israel’s illegal separation wall. Photographed by UK-based photojournalist William Parry, images of the children and their message – along with powerful images of checkpoints and life under occupation – will temporarily ‘hijack’ prominent wall spaces in central London throughout the week leading up to Christmas, with the help of projection artist, Beverley Carpenter. (photographs of Bethlehem and of the projection project in London can be found over the fold!)

The idea is to provide a stark political backdrop to the frantic Christmas shopping rush, to remind Britain and the West that Israel’s illegal occupation and separation wall are strangling Bethlehem – and Palestine – the birthplace of Christ and Christmas. We’re bringing the reality of Bethlehem to London this Christmas.

The children who painted the message on the wall are third and fourth generation refugees, at risk of being made refugees again because of the wall’s devastating impact. We are complicit in suspending their rights to justice and freedom through our governments’ biased support of Israel.”

END_OF_DOCUMENT_TOKEN_TO_BE_REPLACED 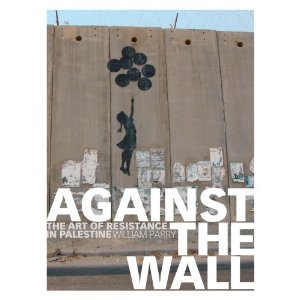 This is the question posed by photojournalist William Parry at the start of his new book Against the Wall: The Art of Resistance in Palestine (Pluto Press, May 2010), in which he documents graffiti artwork on the West Bank Wall and the stories of Palestinians whose lives are affected by said monstrosity.

Below is the introduction to the book, which has been endorsed by political cartoonist Joe Sacco, among others.

Check back early next week for a selection of images from Against the Wall.

In December 2007, the celebrated and famously elusive British street artist, Banksy, and a London-based organisation called Pictures on Walls, relocated their annual ‘squat art concept store’ called Santa’s Ghetto from London to Bethlehem and invited 14 other international street artists to join him to work with Palestinian artists. The concept was simple: the artists would make artwork available for sale by auction to the public – but those wanting to buy an original work of art by Banksy or the others had to physically go to Bethlehem, witness Israel’s occupation and checkpoints, and bid in person. The artists also used the opportunity to utilise the Wall as a giant billboard for their own political messages with some massive, stunning images – wall spaces throughout the city were also populated with work that challenged or subverted understandings about the reality faced by Palestinians under occupation. Within a few short weeks, Santa’s Ghetto had raised over $1 million from art sales for local charities and brought Bethlehem and the Wall to the world’s attention in a way that transcended language and engaged millions who wouldn’t ordinarily take an interest in Israel’s illegal occupation of Palestine. Just as important, it sent a message to the people of Palestine: you are not alone in your struggle.

END_OF_DOCUMENT_TOKEN_TO_BE_REPLACED

Jeremy Harding, one of the Palfest writers, hints at the crucial role culture will play in the liberation of Palestine. Read on to see the great Suheir Hammad.

Last week, the Palestine Festival of Literature organised a discussion about travel and writing at the Dar Annadwa cultural centre in Bethlehem. One of Palfest’s star guests, touring the West Bank and East Jersualem, was Michael Palin, whose early glories, before his reinvention as a traveller, were much on people’s minds. He spoke well about growing up in Sheffield and cultivating a passion for Hemingway, but the audience was delighted when someone suggested that living under Israeli occupation was a bit like being in the Terry Gilliam movie Brazil. As the panellists stood up and tidied their books, a young Palestinian in the seat in front of me said she couldn’t believe we were all with Palin in Bethlehem – Bethlehem! – and no one had thought to ask about Monty Python’s Life of Brian. But with two other writers on the stage, there’d been a lot of ground to cover.