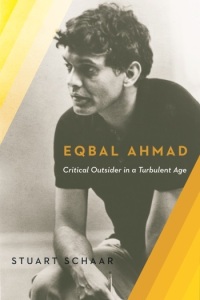 Sadly, Eqbal Ahmad is not as well remembered as he should be. Stuart Schaar’s marvelous new biography, Eqbal Ahmad: Critical Outsider in a Turbulent Age, will help rectify this unfortunate fact.

Among many other endeavours, Ahmad directed the Transnational Institute in Amsterdam, collaborated with Algerian revolutionaries, edited the journal Race & Class, wrote a column for the Pakistani newspaper Dawn, and sat trial for conspiring to kidnap Henry Kissinger. He was a Third Worldist, an internationalist, and a humanist in the very best sense of those terms.

Eqbal Ahmad was a remarkable human being as well as a seminal progressive political thinker. In this illuminating intellectual biography, Stuart Schaar brings his subject to life, drawing on their long, intimate friendship and shared scholarly engagement with the politics of the Middle East and the Islamic world. Above all, Ahmad grasped the toxic interplay between the maladies of postcolonialism and the persistent imperial ambitions of the West better than any of his contemporaries.

In November I had the pleasure of interviewing Schaar about his book for Middle East Dialogues, a video series produced by the Center for Middle East Studies at the University of Denver. Here it is.