In an article for the National, the wonderful Amal Hanano writes against the illusion that perpetuating the Assad regime can lead to anything other than continuing and expanding war.

She noted a dual role for Syrians: both propping up the regime’s propaganda and at the same time subverting its power via the symbols and rhetoric of everyday life and popular culture. This seminal work, published in 1999, a year before Al Assad junior took power, explained to outsiders the inner mechanisms of an authoritative regime. Its relevance is significant today under the shadow of Hafez’s son Bashar and with the fate of a blood-soaked Syria, now in ruins.

In a particularly powerful chapter entitled Acting As If, Wedeen writes: “Power manifests itself in the regime’s ability to impose its fictions upon the world.” The complicity of the people within this imposition enforces the regime’s power of domination. In other words, the regime’s power is mainly constructed by the people’s enacted participation in that very construction.

According to Wedeen: “The politics of acting ‘as if’ carries important political consequences: it enforces obedience, induces complicity, identifies and ferrets out some disobedient citizens …”

Indeed, one of the fundamental ways the Syrian people functioned in the police state was by “acting as if”. Acting as if nothing was going on as Hama was pummeled in 1982. Acting as if they loved the leader even though they were terrified of him.

The tragedy of Bashar Al Assad’s rule is that his father’s construct of complicity has, over the past 32 months, bled far beyond Syria’s borders to encompass the entire region and international community.

As world leaders discuss the merits of the Syrian opposition attending Geneva 2 peace talks without preconditions, they flip the narrative of the revolution. A narrative in which Mr Al Assad is upgraded from a brutal dictator that deserves no more than a cell at The Hague to a potential “partner” in the transitional peace process.

The latest demeaning analysis offered to Syrians is to act “as if” Mr Al Assad maintaining power would end the brutal war that was unleashed by Mr Al Assad himself. Governments act as if dragging the Syrian opposition to the negotiation table without any preconditions will result in a political solution to a raging war. World leaders act as if Mr Al Assad’s cooperation in dismantling his chemical weapon stockpiles is reducing the amount of bloodshed, even as the cluster bombs and scud missiles continue to fall onto civilian populations.

END_OF_DOCUMENT_TOKEN_TO_BE_REPLACED 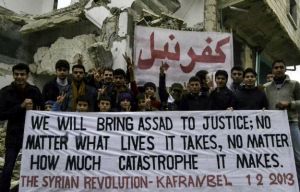 First published at Foreign Policy, the great Syrian journalist Amal Hanano describes her visit to Kafranbel last June (I was honoured to accompany her), and the revolutionary town’s changing strategy in the face of global indifference to (or orientalist misrepresentation of) the Syrian people’s struggle. “Many activists inside and outside Syria,” she writes, “realize that there is no longer a reason to convince the world to action. No one is coming to save Syria.”

KAFRANBEL, Syria — The Syrian revolution’s heart — not yet ravished by the regime or Islamist extremists — beats on in the northern town of Kafranbel, where a group of dedicated activists has captured the world’s attention through witty posters and banners that reflect the state of the revolt since spring 2011. And even as the Syrian narrative has increasingly focused on the extremists or an international plan to dismantle the Assad regime’s chemical stockpiles, the artists of Kafranbel have been engaged in their own struggle — to win back the support of residents of their own town.

The 40-year-old Raed Faris and his partner, 33-year-old Ahmad Jalal, are the creative duo behind the banners. Faris — a tall man with a booming laugh — writes the banners, while Jalal, quiet and shy, draws the cartoons. Together, they spend their time brainstorming, researching, and connecting with others on how to display Syria’s tragedy to the world.

The banners express sophisticated geopolitical analysis in the simplest of forms. They are often inspired by iconic pop culture references: Faris and Jalal have used a Pink Floyd album cover, the Titanic movie poster, and even The Lord of the Rings to describe what is happening in Syria. No side in the crisis was spared — not the Syrian regime and its allies, not the Western powers and the United Nations, not the exiled Syrian opposition, and not even the radical jihadists who eventually came to live among the activists.

Kafranbel’s messages traveled the world. A large collection of the posters and banners was smuggled out of Syria to protect them from being destroyed, and they were displayed as exhibitions across the United States and Europe. One poignant banner — carried in front of the White House last spring on the second anniversary of the revolution — adapted and adopted Martin Luther King Jr.’s timeless words: “I have a dream, let freedom ring from Kafranbel.”

Banners like this one — along with the famous response to the Boston Marathon bombing — drove home the universal and historic nature of the Syrian struggle. Kafranbel’s artists consistently made these connections to show that Syria’s war was not an event isolated by time or geography.

What made Kafranbel’s messages unique was their relentless insistence to reach out to the world. The banners expressed empathy and solidarity: “You are not alone; we suffer with you.” But another message was always embedded: “Do not leave us alone. Do not forget about us.”

But the world read the banners, and did nothing. Eventually, Kafranbel — and by extension, Syria — were disappointed by their global audience.

END_OF_DOCUMENT_TOKEN_TO_BE_REPLACED

As conspiracy theorists of the left and right muddy the waters with lies and half-truths, as they continue their exclusive focus on the peripheral with utter disregard for the actual, the voices of the Syrians themselves are drowned out. Jadaliyya deserves credit for giving space to these voices and shedding light on the human dimension of the conflict. Amal Hanano is the most compelling of these voices. Here’s from ‘One Year of Hope‘. (I’m borrowing the above title from my good friend Phil Weiss).

The enemy was not one man or even his regime. As questionable motives emerged regionally and internationally, it became very clear that there were no real friends of Syria. As we fought each other, we fought a world that insisted on telling us who we were. Suddenly, everyone was an expert on Syria. Opportunistic pundits sucked the Syrian narrative like leeches, dispensing complex conspiracies, warning of the regional and global political interests at stake while belittling the people’s struggle. Opportunism seeped into the Syrian opposition as well: they splintered into rivaling groups, each betraying the other to prove itself worthy of the Syrian street’s loyalty but in the end, their divisiveness rendered the groups unworthy and incapable of defending those blood-soaked streets. The truth of Syria was lost somewhere in the middle of an axis between east and west, right and left, Sunnis and minorities, along fault lines we had never asked to define us, but they did.

END_OF_DOCUMENT_TOKEN_TO_BE_REPLACED

The Syrian regime’s blanket ban on journalist access has some carefully selected exceptions. Robert Fisk, for instance, who seems to be compensating for the naive anti-Syrian and pro-March 14th line in his reporting of Lebanon over the last years by treating the statements of Syrian regime figures – professional liar Boutheina Shaaban is one – with great naivety. At least he didn’t apply the ‘glorious’ epithet to her which he used to describe Walid Jumblatt’s wife. Fisk’s book on Lebanon “Pity the Nation” is a classic, his account of the massacres at Sabra and Shatila remain fresh in the mind (the blood-footed flies clambering over his notebook), and for many years he was one of the very few English-language journalists with some real knowledge of the Middle East. Sadly, his knowledge doesn’t extend to a working familiarity with Arabic. In several recent articles he has informed us that that the slogan of the Ba‘ath Party – umma arabiya wahda zat risala khalida – means ‘the mother of the Arab nation.’ In fact it means ‘one Arab nation with an eternal message’. Fisk is confusing ‘um’ – mother – with ‘umma’ – nation. It’s a rather disastrous mistake. Someone ought to tell him about it.