It’s no news by now that Israel is constructing a culture center in the illegal Ariel settlement. It’s not surprising that Habima, Israel’s national theater company, was scheduled to preform there. It is, however, refreshing that actresses and actors from Habima and other leading theater companies, the likes of the Cameri, signed a letter to Culture Minister, Limor Livnat, refusing to preform in the Occupied Territories.

Of Boycotts and Green Bans

Sixty/Thirty-six is a big number for any one sector in Israel, not to mention for any dissent in Israel, at all. I can’t say the actor’s letter doesn’t spark hope in me as to a growth in dissent in Israel (they’ve been joined by non-theatre people of the arts), but one mustn’t get carried away. The Guardian reported:

“Dozens of Israeli actors, playwrights and directors have signed a letter refusing to take part in productions by leading theater companies at a new cultural center in a West Bank settlement, prompting renewed debate over the legitimacy of artistic boycott.”

END_OF_DOCUMENT_TOKEN_TO_BE_REPLACED

Authors Margaret Atwood and Amitav Ghosh are well known for works centered around oppression and colonialism with an anti-war stance. Tel-Aviv University is one of the prime targets of the academic boycott, for its support and part in Israel’s violent occupation over the Palestinian people. The Dan David Prize is one of those high-profile awards (very similar to the Oscar or the Nobel) which makes celebrities out of artists, academics and and scientists, and kicks perceptions and economies out of whack, for the sake of prestige, in the name bettering the world, under a very capitalist premise. But most importantly, the Dan David Prize is co-sponsored by the Tel-Aviv University (which is of course funded by the government, as it should be) and the ceremony is attended by the president of Israel.

The First BDS Direct Action in Israel
Atwood and Ghosh accepted the prize and its one million dollars, in all its bloody glory, even though they were beseeched, time and time and time again, not to support apartheid. On May 11th they spoke at a symposium, following their acceptance of the prize and we, Israeli activists of BDS, were there to make sure our stance is clear:

END_OF_DOCUMENT_TOKEN_TO_BE_REPLACED

Last week, my local BDS group was put on alert, when the following headline emerged:

The Palestine General Federation of Trade Unions (PGFTU) is a signatory of the PACBI (Palestinian Campaign for the Academic & Cultural Boycott of Israel) call for BDS (#5), and has an estimate of 290,000 members. Naturally, if- all of a sudden- they’re not on board with the BDS movement, it’s cause for concern. That said, the whole scheme of things didn’t seem to make sense, so off I went on another journey through the Zionist Jungle.

END_OF_DOCUMENT_TOKEN_TO_BE_REPLACED

The israeli group, BOYCOTT! Supporting the Palestinian BDS call from within, have circulated a call to action, asking Israeli citizens to contact officials at the University of Trondheim, and express their support for a decision in favor of an institutional boycott against Israeli 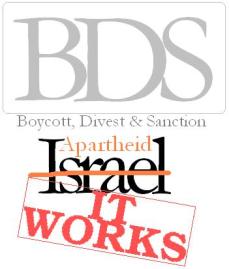 universities. The letter sent by the group itself follows.

Boycott the Israeli Academy Now! – Open Letter from Israeli Citizens to the Board of Governors of Trondheim University

We, Israeli citizens, activists and supporters of BOYCOTT! Supporting the Palestinian BDS call from within, an Israeli group in support of boycott, divestment and sanctions against Israel, applaud faculty members at the University of Trondheim and University College of Sør-Trøndelag in Norway for their principled support for the cause of justice in Palestine by proposing a motion to boycott Israeli universities. We support this historic step in the direction of applying effective pressure on Israel and holding it accountable for its occupation and apartheid policies, which violate international law and fundamental human rights.

END_OF_DOCUMENT_TOKEN_TO_BE_REPLACED

I’m very satisfied that the Boycott Divestment and Sanctions movement conducts itself with the utmost ethical consistency and respect to international law (if it didn’t, I wouldn’t advocate it). It’s true that it’s following the South African model, but at the same time it’s setting an example of its own. As a young activist, it’s a pleasure learning from its outspoken leaders. In my involvement in the movement, every step presents us with an ethical challenge. Avoiding the pitfall of a sweeping, uncommunicative action, the Global BDS movement, led by the Palestinian people, is employing guidelines of a “smart boycott”, differentiating institutions from individuals and Zionists from Jews. It’s never simple and dedicated research and much debate goes into every initiative. As a student of the boycott tactic, it’s just as important for me to learn what not to do, and examples are ample.