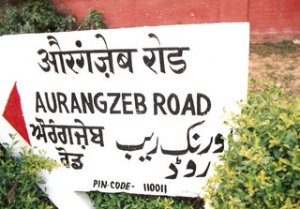 il writes in The Hindu, 27 February 2011, about “that elusive connect with India when she was least expecting it” on a visit to Karachi, Pakistan.  The title of her piece is “A city not unlike home.”

I am always amused when Indians are surprised and taken aback by Pakistanis (whether in Karachi or Lahore or elsewhere) who “speak Urdu and English with almost equal aplomb” or by their “silk sarees and natty blazers” or by their possible cosmopolitanism!!! (Class is class, unfortunately, and the élite exhibit their privileges in similar ways all over the region!)  Does it not, if just remotely, smack of the loaded “praise”: “Gee! Obama is so articulate!” — also known as “the racism of lowered expectation”?  Why would Indians expect otherwise from their class-affiliates on the other side of the border?  Or is it that Bollywood’s Pakistan-bashing fantasies are actually swallowed uncritically — hook, line, and sinker —  even (or perhaps especially) by the educated Indians, eliciting “fears about Kalashnikov-toting Taliban and marauding Muhajirs.”

And by the way, Pakistanis are not all “tall, well-built, good-looking people,” especially under the normative definition of “good-looking” in South Asia (fair-skinned or with a “wheatish complexion”) — thank god for the latter!  Sadly, the former two ascriptions, of course, too easily go awry given malnutrition due to poverty.

A Facebook friend, who first posted the link to Jalil’s article, tells me, “Huma, I see your point(s) but I think she’s comparing Karachi with Lahore.”

Let’s read it again.  Jalil mentions the “tall, well-built, good-looking people” under the sub-heading, “weight of expectations” when describing her “first visit to Pakistan — to Lahore, Faisalabad and Sargodha,” before she has visited Karachi.  She has been “told to look for similarities between the so-called twin cities,” Delhi and Lahore, but finds “something missing” in spite of (or perhaps precisely because of) the lambe-chauRe, haTTe-kaTTe, Khoobsoorat people, Badshahi masjid, and other Mughal and British-era buildings!!  She’s comparing Delhi with Lahore (and Faisalabad, Sargodha).  Is she also saying that these “pretty” folks don’t exist in Karachi?  Really?  According to whose definitions of “prettiness”?  And as I’d mentioned earlier, not all are “pretty” in that upper-class, upper-caste way, though everyone in a certain global élite is slick, pretty (and “prettified”) in very similar ways.

The “silk sarees, natty blazers,” and ah-so-bilingual Pakistanis appear in the article only when Jalil describes Karachi, when she finds “that elusive connect” with Delhi.  Does anyone seriously imagine that the élite  — as that is the only demographic Jalil writes about in any detail — in Lahore (or Faisalabad and Sargodha) don’t wear sarees and blazers, or that anyone from these particular cities could be anything but bi- or tri-lingual (Urdu, Punjabi, and English, perhaps Saraiki as well), at least to some degree, especially the élite?  Jalil describes her observations of the “plebs” only when Asif Noorani, the “veteran journalist for The Dawn, takes [her] on a drive” in Karachi.  If she talks to some real Karachi “heroes”  — Edhi or Asdar or the person-on-the street — she sadly neglects to mention that in her article, leave alone the chasteness of their speech, their bilinguality, the cut of their blazer, height, and built, and most significantly the depth and trajectories of their thought.

Here are a few things I take away from this article, reading it across the grain:

1) The subtle bias in India against Punjabis as all brawn and not much brain, all bhangra, no “high culture,” permeates this piece.  Jalil hears “immaculate Urdu” in Karachi (perhaps not in Lahore?) and thus concludes there is a “striking resemblance” to Delhi.  (Living six months in Delhi, ironically, I rarely heard “immaculate Urdu” there, except in a few particular ghettos…  I did read plenty of incorrect Urdu, though, as in the posted photograph of a road sign in Delhi that reads “Aurankreb Road” in Urdu, instead of what should have been “Aurangzeb Road.”  Moreover there is also the sad irony of the upper-class ahl-e zabaan, people whose mother tongue is/was Urdu, majority of whom cannot read Urdu at all, due to the skewed language politics of post-Independence India.)

2) Connected to this more overt prejudice towards Punjabis is the condescending attitude towards all Pakistanis, though sometimes disguised by the happy surprise of discovering something that was initially unexpected due to “the racism of lowered expectation.”  This bias and fetishism are flip sides of the same coin — minted by the dominant Indian discourse, which continues to conceive of Pakistan as an illegitimate nation, founded by Jinnah, whom Jalil elsewhere deems unworthy of even being compared to Gandhi, or being “referred to in the same breath.”  This is notwithstanding Gandhi’s very troubling politics vis-à-vis caste (Ambedkar, What Congress and Gandhi Have Done to the Untouchables, Delhi: Gautam Book Centre, 2009[1945], Chapter XI) and his extremely disturbing stance on sexuality, especially the deployment of very young women’s bodies for his own alleged “spiritual” and “political” purposes.  Moreover the whole discourse of blaming solely Jinnah and his party, Muslim League, for Partition has been deconstructed and debunked very convincingly by historians and intellectuals like Ayesha Jalal, Joya Chatterji, Mridu Rai, A.G. Noorani, et al, time and again, yet these radical findings do not manage to pierce mainstream Indian consciousness.

3) Most deplorable of all, however, is the blasé attitude towards class (and the related variables of caste and ethnicity).  Even though Jalil piously mentions “oases of privilege, such as the Raj-era gymkhanas and clubs where the blue-rinse set play bridge and mah-jong” versus the “crowd sitting under a tent with a van” waiting for free food in Karachi, her adulation and realization of kinship in Karachi are reserved not for the ‘aam aadmi (common person), but for the ra’ees who inhabit these same “oases of privilege.”  Had Jalil talked to, or written about, people beyond the minuscule cultural élite, she might have discovered striking affinities (as well as crucial and instructive divergences) in the way the Third World oppressed is getting crushed under the rollers of neo-imperialism, globalization, and corporate greed unbeknown to, and with the complicity of, the “hep” crowd, in both India and Pakistan.  Jalil’s piece, as of now, could have been alternatively titled: “An Élite Not Unlike Ours!  And Who’d Have Guessed?!  Not Me.”

5 thoughts on “An Élite Not Unlike Ours! Who’d Have Guessed?!”