In this interview, Noam Chomsky offers his views on the current global economic crisis, exploding many of the myths, double standards and hypocricies of mainstream media commentary.

SAMEER DOSSANI: In any first year economics class, we are taught that markets have their ups and downs, so the current recession is perhaps nothing out of the ordinary. But this particular downturn is interesting for two reasons: First, market deregulation in the 1980s and 1990s made the boom periods artificially high, so the bust period will be deeper than it would otherwise. Secondly, despite an economy that’s boomed since 1980, the majority of working class U.S. residents have seen their incomes stagnate — while the rich have done well most of the country hasn’t moved forward at all. Given the situation, my guess is that economic planners are likely to go back to some form of Keynesianism, perhaps not unlike the Bretton Woods system that was in place from 1948-1971. What are your thoughts?

NOAM CHOMSKY: Well I basically agree with your picture. In my view, the breakdown of the Bretton Woods system in the early 1970s is probably the major international event since 1945, much more significant in its implications than the collapse of the Soviet Union.

END_OF_DOCUMENT_TOKEN_TO_BE_REPLACED

A vibrant and wonderful student movement has flowered a the Strathclyde University which has scored two major victories for peace and justice within this month. We at PULSE salute all the students, in particular Strathclyde Stop the War, Action Palestine, and the Strathclyde University Muslim Students Association (SUMSA) for their indispensable work. In today’s excellent guest editorial, Kim Bizzarri, who has himself lead from the front, reports on these successes and the prospects for future.

GLASGOW, February 21 – Students at Strathclyde University won the vote on Thursday to cut the university’s ties with arms manufacturer BAe Systems which supplied components used by the Israeli military in the recent massacre of Palestinian civilians in Gaza.

The vote, which took place in relation to a motion submitted by a group of students to their Union’s General Meeting (AGM) – the student’s highest decision-making body – won with an overwhelming majority of the over 200 students who queued in the union’s corridors and stairs to participate in the event. Such a high student attendance had been unprecedented in any previous AGM, most of which failed in the past 10 years to even reach quorum.

Despite attempts by the Union’s administration to dilute the substance of the motion and have it voted upon by the conservative Student Representative Council (SRC) – who had already rejected a similar popular motion two years earlier given the uncomfortable position it placed the University vis-à-vis its corporate funders – the fervent group of passionate students were successful in galvanising sufficient support amongst their fellows to turn the motion into student policy.

Within weeks of occupying the McCance Building – heart of the University’s administration – the original 60 students involved in the occupation have already gained the support of a sizable number of their fellow students.

END_OF_DOCUMENT_TOKEN_TO_BE_REPLACED

The analysis of the recent ceasefire in Swat has drawn the ire of the desktop Napoleons in Islamabad and Karachi. The Western press has taken an equally blinkered view, liberal and conservative alike. Even otherwise sober analysts such as the Observer’s Jason Burke have joined the chorus. On the other hand, Rahimullah Yusufzai, the most informed and astute analyst of the region’s politics, sees ‘signs that inspire hope‘.

Maulana Sufi Mohammad has once again been tasked to perform a familiar role. He is trying to persuade militants in Swat to drop their guns and go home. His argument is that the government had accepted his demand for enforcement of Shariah, or Islamic law, and there was now no point in continuing the armed struggle that has turned Pakistan’s most beautiful and greenest valley into a battlefield.

The task before him is difficult and the environment in which he is operating is dangerous. But the elderly cleric is made of sterner stuff and even risks to his life won’t turn him away from doing what he believes is the right thing to do. Back in 1994, he did something similar by persuading the armed fighters belonging to his organisation, Tanzim-e-Nifaz Shariat-e-Mohammadi (TNSM), to stop fighting the state. A military helicopter flew him to all those places in Swat, Shangla, Dir, Kohistan and other districts where his black-turbaned followers had blockaded roads and set up hilltop positions to fight the troops from the paramilitary Frontier Corps and personnel of the other law-enforcement agencies. Accompanied by Major General Fazal Ghafoor, the-then inspector general of the Frontier Corps, and some other civil and military officials, he would disembark from the chopper, make a rousing speech to his startled fighters and urge them to return to their villages. On occasions, he would even reprimand them for taking up arms against their Muslim brothers in the FC. He would argue that the use of force for achieving the worthy cause of Shariah was wrong.

END_OF_DOCUMENT_TOKEN_TO_BE_REPLACED

European Union aid has been given to an Israeli oil company which has reduced the supply of fuel to Gaza as part of an economic blockade internationally recognised as illegal, Brussels officials have admitted.

Almost 97 million euros (124 million dollars) in funds managed by the European Commission, the executive arm of the EU, were handed over directly to the firm Dor Alon between February 2008 and January this year. Under orders from the Israeli authorities, Dor Alon has been rationing the amount of industrial diesel brought into Gaza in order to deprive its 1.5 million inhabitants of electricity. Power cuts have been a regular occurrence in Gaza because of Israeli actions undertaken since the militant party Hamas won an unexpected victory in Palestinian legislative elections during 2006.

END_OF_DOCUMENT_TOKEN_TO_BE_REPLACED

J.M. Coetzee’s award-winning novel Disgrace offered a disturbing insight into the soul of modern South Africa. The screen version does not disappoint and features an outstanding performance from John Malkovich as the disgraced professor whose personal life reflects the turmoil of a country in transition. Dismissed from his university, David Lurie (Malkovich) decides to visit his daughter at a remote farm in the eastern Cape that she shares with a trusted black worker. When they are savagely attacked by three black youths, David is finally confronted by the realities of a South Africa where the old rules no longer apply.

I have been looking forward to this for some time. Coetzee is one of my favourite writers; Diary of a Bad Year, Youth, Master of Petersburg and Waiting for the Barbarians are phenomenal works of fiction. But I have mixed feelings about Disgrace (which, incidentally, was chosen as the best English novel of the past 25 years by top writers and critics). Here is what I wrote in a Facebook review:

END_OF_DOCUMENT_TOKEN_TO_BE_REPLACED

It is quite likely that you have not heard of the most important developments this week in the Israeli-Palestinian conflict. In the West Bank, while it has been “occupation as normal”, there have been some events that together should be overshadowing Gaza, Gilad Shalit and Avigdor Lieberman.

END_OF_DOCUMENT_TOKEN_TO_BE_REPLACED

‘The Swat accord is doctrine of necessity in its purest form’, Ayaz Amir argues.

Those armchair warriors — and there’s no shortage of them out here — who are wringing their hands over the Swat accord should ask themselves whether the government had any alternative. Necessity, and iron necessity at that, is the mother of this accord. The authorities were left with no other option because the Swat Taliban under the command of Maulana Fazlullah had fought the army to a standstill.

In Pakistan, as indeed elsewhere, sending in the army is the option of last resort. We had tried this option in Swat and it hadn’t worked. In fact the Taliban, far from being defeated, were in the ascendant, their grip on Swat tighter than before the operation began. The army was there, as it still is, taking distant artillery shots at the Taliban, and occasionally sending in helicopter gunships, but for all that confined largely to its bunkers.

Guerrilla insurgencies are not defeated by such long-range or long-distance tactics. So what was the ANP government in Peshawar to do?

END_OF_DOCUMENT_TOKEN_TO_BE_REPLACED

With 1.6 million internally displaced persons and an unemployement rate of 40-65%, Dahr Jamail reports about the plight of Iraqi families dispossessed and left homeless by the war.

“We only want a normal life,” says Um Qasim, sitting in a bombed out building in Baghdad. She and others around have been saying that for years. Um Qasim lives with 13 family members in a brick shanty on the edge of a former military intelligence building in the Mansoor district of Baghdad.
Five of her children are girls. Homelessness is not easy for anyone, but it is particularly challenging for women and girls.

END_OF_DOCUMENT_TOKEN_TO_BE_REPLACED 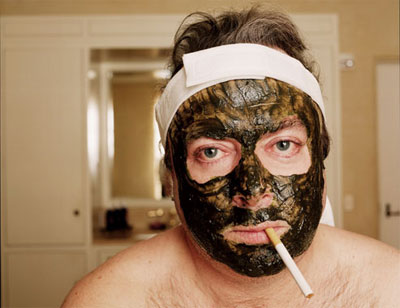 What else could one say, except: ha-ha-ha! (Also check out this interesting report on Hitchens’s speech at the AUB)

As a professional provocateur and vocal supporter of the war in Iraq, Christopher Hitchens has been engaged in countless verbal punch-ups with his ideological opponents, most of them conducted from the safety of a TV studio.

However, when the controversial author, journalist and broadcaster defaced a political poster on a visit to Beirut last week, he found himself at the wrong end of a bruising encounter that has left him walking with a limp and nursing cuts and bruises.