Nixon already tried this in Vietnam. ‘Asian boys to fight Asian boys.’ It failed. In Iraq the Sahwa militias succeeded only as a result of particular circumstances. In Afghanistan, where blood feuds last generations, it can only sow the seeds of permanent civil war.

People & Power examines dangerous conflicts between the US and NATO strategies in the fight against the Taliban.

by The Asian Human Rights Commission

PAKISTAN: Minister tasked with saving US airbase at the cost of the displacement of thousands

The presence of Pakistan army personnel speaks to the fact that the breach of Jamali bypass was intentional and ordered from above.

It has been reported earlier that the US Air Force has denied the relief agencies use of the Shahbaz airbase for the distribution of aid and assistance. Soldiers of the Pakistan army, a federal minister and the administration of Sindh province are blamed for the incident involving Shahbaz Airbase at Jacobabad district in Sindh province in which it has been reported that flood waters were diverted in order to save the airbase. The diversion of the floodwaters is blamed for inundating hundreds of houses and the displacement of 800,000 people. According to the media reports, the Federal Minister of Sports along with soldiers from the army and a contingent of officials from the Sindh provincial government breached the Jamali Bypass in Jafferabad district of Balochistan province during the night between August 13 and 14 to divert the water entering the airbase which has remained in US Air Force hands since the war on terror started in 2001.

END_OF_DOCUMENT_TOKEN_TO_BE_REPLACED

Legendary journalist John PIlger speaks to Riz Khan about the ostensible US withdrawal from Iraq. In his otherwise sensible commentary, Pilger claims that troops will remain to protect oil contracts, which of course doesn’t make much sense because all the major contracts are held by Russian, Norwegian, Chinese and French companies.

US combat forces have left Iraq, but who should be held accountable for the invasion and occupation that has left hundreds of thousands dead? Veteran investigative journalist John Pilger joins the show to discuss.

Also see this this important article in which Pilger defends Wikileaks, whose founder Julian Assange is now the subject of an international smear campaign.

In annexing Kashmir, Indian leaders put aside their progressive anti-colonialism, and pursued a policy that stood in direct confrontation with the goals of struggling Kashmiris. Nehru’s professed derision for princes and despots proved facile in Kashmir in this first real test of his commitment to anti-colonialism and democratic values. His decision to urge the discredited and runaway Dogra ruler to sign the imperial Instrument of Accession, and then accept it, was a defeat for the oppressed Kashmiris who had, with great sacrifices, forced the Dogra ruler out. By recognizing the authority of the Dogra ruler, Indian sovereignty over Kashmir simply replaced the sovereignty enshrined in the Dogra maharaja. But along with that sovereignty, India inherited Dogra rule’s illegitimacy as well.

On 26 January 1992, Murli Manohar Joshi, the leader of the Hindu nationalist Bharatiya Janata Party, after travelling by road all the way from the southern tip of India, was airlifted from Jammu to the heart of Srinagar where he half-raised the Indian flag near historic Lal Chowk. All of Kashmir was put under severe curfew, and the army was given shoot-at-sight orders. Throughout the day soldiers shot dead more than a dozen Kashmiris in the streets of Srinagar. Over the previous two years, the Indian government had unleashed a reign of terror on the people, with massacre upon massacre of unarmed protestors dotting Kashmir’s timeline. Joshi’s Ekta Yatra (Unity March), protected and provided of full support by the Indian government, was an important reminder of the nature of the Indian state and the relationship it sought with the people of Kashmir. The event was designed to put on display the majoritarian character of Indian nationhood, and line up power of the state behind it to send barely coded messages to audiences in India and in Kashmir.

END_OF_DOCUMENT_TOKEN_TO_BE_REPLACED 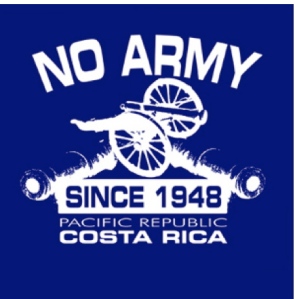 Tensions are high in Costa Rica following the announcement of the impending arrival of United States military vessels. In the past year alone, a sudden expansion of US military presence around Latin America has alarmed many in the region. Now it is spreading to the one nation which had previously been known for the absence of any standing permanent army, foreign or national.

After receiving a diplomatic request from the US Embassy, on July 1 the Costa Rican legislative assembly approved a measure to grant unprecedented access to a US military fleet in Costa Rica’s waters. The vessels will arrive for at least six months to assist counter-narcotics operations by Costa Rican authorities. Costa Rica has long been used a stopping point of entry for drugs coming from Colombia and Panama on their way further north.

This type of partnership between the US and Costa Rica is not new. Since 1999, a maritime agreement titled the “Joint Patrol” has allowed the US Coast Guard to operate in the waters of Costa Rica for similar purposes. However, this particular agreement goes far beyond previously established boundaries. The Joint Patrol agreement limited US personnel to Coast Guard only, allowing for Costa Rican law enforcement to ride on US ships if they have reason to suspect suspicious activity, and vice versa.
END_OF_DOCUMENT_TOKEN_TO_BE_REPLACED

In this clip, the host isn’t particularly well-informed about Afghanistan and some of his comments are plain silly. But some of Wilkerson’s commentary is interesting. As Gareth Porter has repeatedly pointed out, the war is rooted in domestic political consdierations. It has nothing to do with US strategic interests, Leftist conspiracy theories notwithstanding (which for some reason excuse the war’s present architects to always focus on Zbigniew Brzezinski, a man who has been advising against occupying Afghanistan for 9 years).

END_OF_DOCUMENT_TOKEN_TO_BE_REPLACED

General Stanley McChrystal’s kamikaze interview had the desired effect. He was sacked and replaced by his boss General David Petraeus. But behind the drama in Washington is a war gone badly wrong and no amount of sweet talk can hide this fact. The loathing for Holbrooke (a Clinton creature) goes deep not because of his personal defects, of which there are many, but because his attempt to dump Karzai without a serious replacement angered the generals. Aware that the war is unwinnable, they were not prepared to see Karzai fall: without a Pashtun point man in the country the collapse might reach Saigon proportions. All the generals are aware that the stalemate is not easy to break, but desirous of building reputations and careers and experimenting with new weapons and new strategies (real war games are always appealing to the military provided the risks are small) they have obeyed orders despite disagreements with each other and the politicians.

END_OF_DOCUMENT_TOKEN_TO_BE_REPLACED

WikiLeaks, a website that publishes anonymously-sourced confidential documents, has published a previously unseen footage showing a US helicopter firing at civilians in Iraq, killing a dozen of them.

Among the dead were two journalists, Namir Nour El Deen, a photographer, and Saeed Chmagh, a driver, both employees of the Reuters news agency.

Namir’s brother, Nabil Nour El Deen, tells Al Jazeera after watching the footage that it is clearly a crime committed by the US military. (Apr 6, 2010)

Background: Wikileaks releases evidence of a barbaric US crime in Iraq