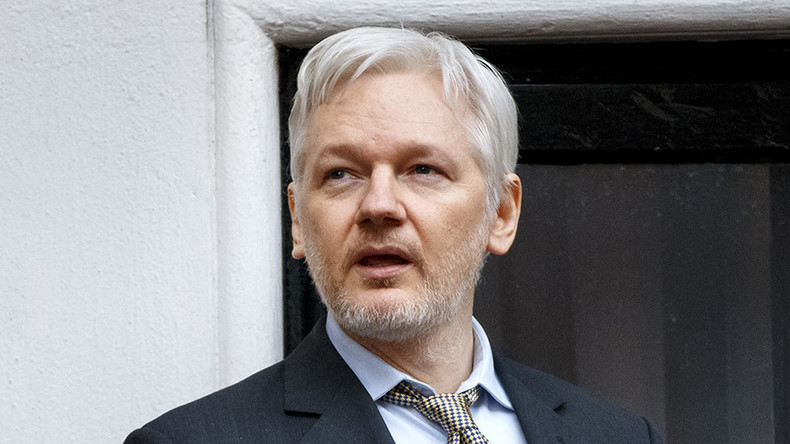 Julian Assange barely even knows the far-right, Holocaust-denying Russian kook with six different names, the latest being “Israel Shamir.” That was the line in March 2011, per a statement from WikiLeaks, released amid what the head of the former transparency organization reportedly claimed was a Jewish-orchestrated campaign to smear him.

It is false that Shamir is ‘an Assange intimate’.

Months before, Julian Assange himself disputed this. In a letter from November 2010, just obtained by the Associated Press, the WikiLeaks founder wrote:

I, Julian Assange, hereby grant full authority to my friend, Israel Shamir, to both drop off and collect my passport, in order to get a visa, at the Russian Consulate, London.

A month later, Shamir would travel to Belarus, handing the pro-Russian dictator, Alexander Lukashenko, U.S. diplomatic cables, obtained by WikiLeaks detailing America, interactions with Belarusian opposition figures, some of whom would end up arrested, or dead.

But we already knew Assange was intimately familiar with the odious Shamir; all one needed to do was read what those slandered as MSM smear-artists were reporting, credibly, at the time. For example, as former WikiLeaks staffer James Ball noted in a piece for The Guardian back in November 2011:

Shamir has a years-long friendship with Assange, and was privy to the contents of tens of thousands of US diplomatic cables months before WikiLeaks made public the full cache. Such was Shamir’s controversial nature that Assange introduced him to WikiLeaks staffers under a false name. Known for views held by many to be antisemitic, Shamir aroused the suspicion of several WikiLeaks staffers – myself included – when he asked for access to all cable material concerning “the Jews”, a request which was refused.

When questions were asked about Shamir’s involvement with WikiLeaks, given his controversial background and unorthodox requests, we were told in no uncertain terms that Assange would not condone criticism of his friend.

Assange would subsequently accuse his former colleague of making “libelous” accusations about him. But, despite electing to reside in Britain, rather than defend himself in Sweden from allegations of sexual assault, Assange did not take advantage of the country’s liberal defamation laws.

Thanks to a leak, we have a better idea why — and further evidence that one should not blindly trust the public statements of political celebrities. The question now is not whether Assange is a serial liar prone to bouts of defamatory projection, but whether his friend, Israel Shamir, had an ulterior motive for providing U.S. cables to an ally of the Kremlin just weeks after the WikiLeaks founder had used him to request assistance from Russian officials.

“Conflicts have always allowed very suitable ecosystems for Non Governmental Organisations or NGOs to flourish in. Embroiled with armed insurgency for about two decades now, Kashmir has attracted a plethora of organizations. But going by the numbers, the region seems to have become a heaven for NGO activity.”

Conflicts have always allowed very suitable ecosystems for Non Governmental Organisations or NGOs to flourish in. Embroiled with armed insurgency for about two decades now, Kashmir has attracted a plethora of organizations. But going by the numbers, the region seems to have become a heaven for NGO activity.

There is no central register for the NGOs operating here, no guidelines or any overt accountability. Various estimates put the figure of existing NGOs up to 16,000. Apart from the office of the Registrar of Societies, NGOs are registered for various non-profit activities as trusts and voluntary groups in the district courts. Besides, many NGOs from across the country operating in Kashmir are not registered here.

All you need is five persons and a draft of bylaws along with a declaration of supposed objectives that is then registered in any district court where no count is maintained.

Just what is this huge mass of NGOs doing and who are the people who run them? What is the real intent and incentive for this NGO boom in a region that is still considered business ‘unfriendly’? Where is the funding coming from? A superficial enquiry reveals a dizzying range of unclear activity bordering on subterfuge.

Government employees, close relatives of bureaucrats, politicians, well-off families and people who have been a part of counter insurgency think tanks, run a number of NGOs in the Valley. Kashmir Foundation for Peace and Developmental Studies (KFPDS) run by a former militant commander, Firdous Sayeed Baba alias Babar Badr, has been on the scene for many years now. Babar and four other former militant commanders were the first to enter into dialogue with New Delhi in 1995. He is also known to be very close to the former Intelligence Bureau (IB) chief A S Dullat, who for many years earlier and during NDA regime served as New Delhi’s point man on Kashmir affairs. END_OF_DOCUMENT_TOKEN_TO_BE_REPLACED

Last Monday, on the 6th of May, Israel’s Ministerial Committee for Legislation decided to approve the “Jenin Jenin Amendment” in a paramilitary hearing. The amendment [Hebrew] is an addition to the Israeli Defamation Law [Hebrew], stating that army personnel and the state can sue individuals, who expose army violence, for libel, without proving damages. The amendment comes as a reaction to Israel’s Supreme Court rejecting soldiers’ class action suit of defamation against actor/director Mohammad Bakri, for his documentary Jenin Jenin (watch it in full here), in which Palestinian testimonies describe their experiences of the 2002 massacre perpetrated by Israel’s army in the besieged refugee camp.

END_OF_DOCUMENT_TOKEN_TO_BE_REPLACED

A surprise peak of Madonna concert ticket sales comes from a small territory in the Middle East known as “The Dictatorship Formerly Known as Palestine”. A war-torn land, which’s people have obviously suffered enough. Thus, in a desperate attempt to escape the hardships of every day shopping, they turn to the Material Girl’s hard hitting, politically provocative show. With international hits like “Girl Gone Wild” (dedicated to Palestinian activist Rana Nazzal Hamadeh who courageously mounted the notorious “Skunk” truck) and that song of hope and liberation “Turn Up The Radio”, Madonna always has world peace on her mind.

Due to the high ticket sales, super-mega-star Madonna has treated the Middle East with what its been thirsting for. Nope, it’s not water; It’s a second concert, dubbed “Dirty Laundry”. Once again, calling attention to the colonial state of Israel’s policies of apartheid against the Palestinian people, Madonna shines with yet another brilliant PR move. Outdoing her own diplomatic efforts of the 2009 concert in Israel and far surpassing Leonard Cohen’s whitewashing of concert proceeds with NGOs in desperate need of cash, Madonna chose to buy out the already sold-out Peace Industry NGOs with more slogans of peace and free tickets.

Arriving a week early for rehearsals, we met up with the pop diva for a sun bathing session on the shores of the White City, and she carried this message of peace on earth:

Music is so universal and if there’s any chance that through my performance I can bring further attention and enlightenment to honor the peace efforts in the Middle East and help people come together, it would be an honor for me. It is my way of thanking those who are making so much effort toward bringing peace to the Middle East.

Madonna’s humble gratitude doesn’t go unanswered and already pro-peace-Israel’s biggest propaganda outlets are abuzz with the latest elevating of hardships, due to the cultural siege it’s been suffering:

The fact that she chose Israel to begin her world tour and will be arriving a week early to hold rehearsals has been seen as a boost for the country, which has witnessed some performers canceling shows and others opting not to appear here at all.

But gratitude must also be extended to those tireless Non-Governmental-At-All activists at the Creative Community for Peace Laundromat who brought Conan O’Brien along to add that missing air of glitter quality. And producer (and dry-cleaner extraordinaire by day and “cultural terrorism” fighter by night) Shuki Weiss, who was willing to sell the “Dirty Laundry” tickets at a reduced price and even provide free tickets for white-as-snow government celebrities:

The artist’s shrewd political maneuver has indeed brought the much needed unity to the inflamed region, as a joint statement was issued by President of the Palestinian National Authority, Mahmoud Abbas and Hamas leader in the Gaza strip, Khaled Mashal:

We, Mahmoud Abbas and Khaled Mashal, the leaders of the new unity government of the Palestinian people would like to bestow Madonna with an honorary Palestinian citizenship on this wondrous occasion of her bridge-building concert (and once we get our land back), but we are stuck at the checkpoint and being shot at in the “Death Zone” respectively.

Julian Assange was recently awarded the Sydney Peace Foundation (SPF)’s peace medal, presented to him in London. The  event was organised at the Frontline Club. Assange’s acceptance address follows introductions by the SPF’s Stuart Rees and Mary Kostikidis.

Like many activists, I get hoards of hate mail. As someone who’s committed to abolishing violence, whether it be peer-to-peer or on a global scale, I believe that none of us should fear exposing violence towards us, or our friends and loved ones, who don’t have the privilege to do so. In my case, I truly believe I have absolutely nothing to fear, and so I bring to you a “correspondence”, initiated by Jeffrey S Wiesenfeld, after I had sent a stencil letter to the CUNY Board of Trustees members, including himself, regarding the Tony Kushner affair. I believe this is called harassment.

END_OF_DOCUMENT_TOKEN_TO_BE_REPLACED

Much of the TV, video, film and sport we watch is sponsored by a brand, a product, a corporation. But … why? With humor and persistence, filmmaker Morgan Spurlock dives into the hidden but influential world of brand marketing, on his quest to make a completely sponsored film about sponsorship. And yes, this talk was sponsored too. By whom and for how much? He’ll tell you.