In Bil’in, the villagers tried yet another creative attempt at ending apartheid, dressing up as the assassinated Naji al-Ali’s Handala and carrying the symbolic 1948 key.

The army, like a well oiled machine, attacked with chemical warfare, invaded the village to abduct an Al-Arabiya reporter, using a smoke screen canister that spits fire as well.

Fires sparked due to the combination of Middle Eastern heat and ammunition. About 20 olive trees were lost, as it took the fire truck about an hour to arrive and the army had to be begged to stop gassing us, so we could approach the burning areas. Video clips after the fold.

END_OF_DOCUMENT_TOKEN_TO_BE_REPLACED

All across the protesting villages of the West Bank, the political intimidation is escalating with arrests of activists. There will be no footage from Bil’in, this week, as friend, fellow activist, B’tselem camera man and Bil’in resident, Haitham Al-Khatib was arested, yet again, while doing his job. (update 20.5.10: this week’s footage has been recovered and can be found here) Along with two fellow Bil’in residents, Al-Khatib was taken to Ofer prison, without even so much as an interrogation. The two Israeli activists and international activist were released at 20 past midnight, that night.

In Ni’lin, a bit of symbolic flag burning was quickly dispersed with chemical weapons.

END_OF_DOCUMENT_TOKEN_TO_BE_REPLACED

The call for academic and cultural boycott is clearly a way to encourage civil society to play a broader political role—that is why it has the support of wide sections of Palestinian civil society. One of the most significant questions that call poses to us is simply this: How could those of us who oppose apartheid, occupation, and colonialism not support such a call?

We wish to express our deep disappointment in your decision to accept the Dan David prize, administered by Tel Aviv University and to be awarded by the President of Israel. As a writer whose work has dwelled consistently on histories of colonialism and displacement, your refusal to take stance on the colonial question in the case of Israel and the occupation of Palestine has provoked deep dismay, frustration, and puzzlement among readers and fans of your work around the world. Many admired your principled stand, and respected your decision not to accept the Commonwealth Writers Prize in rejection of the colonialist framework it represented.

END_OF_DOCUMENT_TOKEN_TO_BE_REPLACED

Four people arrested in Bil’in. As you can tell by the video’s last few minutes, as friend and journalist, Tommy Donnellan, is being carried off, the army knows that he is of the press. What do you call it when the authorities arrest the press, again?

END_OF_DOCUMENT_TOKEN_TO_BE_REPLACED

On April 25, over 1000 New York-area Jewish extremists gathered in midtown Manhattan to rally against the Barack Obama administration’s call for a freeze on construction in occupied East Jerusalem and to demand unlimited rights to colonize the West Bank. With Obama and top White House officials engaged in a charm offensive to repair their relationship with mainstream American Jewish organizations, speakers at the rally lashed out at the Jewish groups and Democratic politicians, warning that cozying up to Obama would endanger Israel and imperil their cherished settlement enterprise.

Last year, Blumenthal, along with Joseph Dana, produced the famous “Feeling the Love in Jerusalem” video that was banned on YouTube and Huffington Post. He also produced “Bomb a Ghetto, Raise a Cheer,” a video documenting pro-Israeli teabaggers rallying in support of Operation Cast Lead. For more of Blumenthal’s works click here.

In Bil’in, the army remembers Bassem Abu Rahmeh by escalating to rubber bullets and live ammunition. A big ceremony was held with Fatah and the Fatah Youth marching band:

END_OF_DOCUMENT_TOKEN_TO_BE_REPLACED 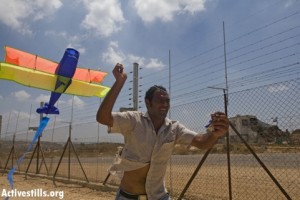 Today is the first year’s anniversary of Bassem Abu Rahmeh’s Death. I didn’t know Bassem, but I watched him die. It was only a few months after the Gaza massacre. Nobody cared for a dead Palestinian. Two weeks later I started going to Bil’in. I’ve been going every week ever since. I’ve met people I’ve come to care about. I’ve met Bassem’s friends, who welcome me in their home with a smile and embrace. His family, who have been shot and jailed. His fiance- a beautiful Israeli activist- whom I’ve come to love like a sister. I care about their life and I see them hurt.

Burying Bassem Abu Rahmeh
A couple weeks ago, I stumbled upon an article in the Ha’aretz website, that unsurprisingly never showed up in the English version (I’ve written before about Ha’aretz double standards, when it comes to its international audience). It was titled “The Military Attorney Won’t Investigate the Death of a Demonstrator of IDF Fire in Bil’in a Year Ago”.

END_OF_DOCUMENT_TOKEN_TO_BE_REPLACED

The war continues at Nebi Salah:

END_OF_DOCUMENT_TOKEN_TO_BE_REPLACED

In heavy rain and under heavy threat, all the weekly demonstration insistently ensued, across the West Bank. The village of Al Ma’asara demonstrated against the latest arrest and torture of the local demonstration organizer, Omar Alaaeddin:

END_OF_DOCUMENT_TOKEN_TO_BE_REPLACED

In spite of the latest Israeli army attempts to stop the demonstrations against the wall, about 50 Israelis and 25 internationals joined Bil’in residents in protest. After the demonstration was declared over, the army infiltrated the village and fired gas and shock grenades at the youth, protecting their village with stones.