At the hight of the campaign to urge Alicia Keys to cancel her performance in apartheid Israel, the Jerusalem Post excitedly announced that “despite the bad investment” Israel is willing to “invest” in Forbes’ fourth most powerful celebrity of 2012, Rihanna. The mega-celebrity, holding the formidable position of most popular person on Facebook, 4th most followed on Twitter, and most viewed and subscribed musician on YouTube, is returning to Israel for a second time, on October 22.

Unlike Alicia Keys, Rihanna is quite reachable, so make sure to go to her page at http://www.rihannanow.com/contact/ and respectfully explain why she should cancel her performance in Israel.

Since Rihanna is returning for a second time, it seems to me she may have missed the official celebrity tour by the Tourism Ministry. So I’d like to guide Rihanna on a virtual journey, from Yarkon Park Tel Aviv to occupied Palestine.

END_OF_DOCUMENT_TOKEN_TO_BE_REPLACED

The gap between reality and perception is even greater than the reality between perception and ideal.

Note: I don’t speak French, I’m responding to a Google Translate version of the original post, so I’ll refrain from my usual special attention to semantics, in order not to dwell on what may be a technical mistake in translation.

Last Wednesday, Jacky Terrasson’s agent, Christophe Deghelt, responded to the massive campaign to boycott the Israel state sponsored Red Sea Jazz Festival (more details on the government and corporate connections of the festival in this article). Since thought did actually go into this post, I think we in the BDS movement should respond. So here it is, point-by-point. I hope this furthers public discussion, as BDS so often does, because just like Christophe Deghelt, this is a “debate that I hold dear”.

On Notions of  War, Peace, and Popular Struggle

END_OF_DOCUMENT_TOKEN_TO_BE_REPLACED

Update: On January 6, Stanley Jordan has cancelled his collaboration with the Red Sea Jazz Festival, joining a long line of artists combining their ethics, politics, and spirituality. Joy Harjo, still has not made a public statement rethinking her stance on the issue.

Note: Stanley Jordan is scheduled to perform in the Red Sea Jazz Festival between 17-19 of January. Although, after much deep soul searching, he has written a statement that he intends to continue as scheduled (below), in our political reality, we don’t give up until the Jazzist plucks the first guitar string in front of a segregated audience.

For your convenience, the rest of the international artists performing in the festival are listed at the end of this article. 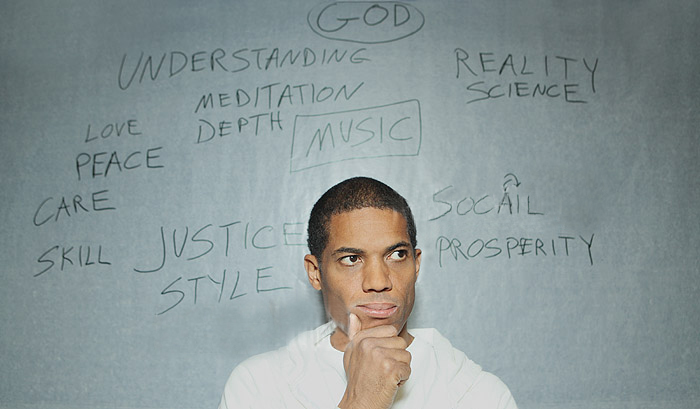 I’m a Spiritual Atheist. I never knew you could capitalize that phrase, but thank DOG, the internet is a wondrous place:

2) SPIRITUAL
Spiritual Atheists believe that the entire universe is, in some way, connected; even if only by the mysterious flow of cause and effect at every scale. Therefore, Spiritual Atheists generally feel that as they go about their lives striving to be personally healthy and happy, they should also be striving to help the world around them be healthy and happy! (“Wholistic Ethics”)

There are many people in the world like me. Some are atheists, some are theists. I respect all’s choices and love me a good theological debate, but to me, the most important piece of information in the above quote is “generally feel that as they go about their lives striving to be personally healthy and happy, they should also be striving to help the world around them be healthy and happy!”. This is also the first time I’ve heard the phrase “Wholistic Ethics”, I have my critique of it (and also have a critique of trying to unite atheists who define themselves as spiritual), but that would derail the conversation from what I really want to talk about: What does spirituality have to do with politics? END_OF_DOCUMENT_TOKEN_TO_BE_REPLACED

Earlier this week, I found a message in my inbox by an Israeli, who’s a Jazz musician, who’s paying gig was canceled because of a successful BDS movement campaign to get Swedish Jazzist, Andreas Öberg, to cancel his gig in the Eilat Red Sea Jazz Festival. Usually, the extent of my response, when I get unsolicited mail from angry Israelis, is to take a screenshot and add it to my “Love Letters” albums on my Facebook profile. Call it an artistic form of exhibiting political repression, racism and sexism, if you will (but what does culture have to do with politics, I wonder…). This time, however, since we’re not talking about your typical angry Red Hot Chili Peppers fan, but someone who has lost a paying gig. I think it merits a response (even though, as I will argue below, I am actually not the address for cultural worker grievances).

END_OF_DOCUMENT_TOKEN_TO_BE_REPLACED

The interesting thing about Israel is that its government and registered citizens have a wonky spatial perception, which feeds off itself: In Israel, you’re not in the state, the state is in you. Due to this cyclical perception, along with the “standard” “nation branding” (a marketing lie on to itself, and that sick capitalist perception of a state- a geographic territory with obligations and responsibilities towards its respective inhabitants- as a product which is on the market for sale), known as Brand Israel, much of Israel’s propaganda is based on the blurring of the lines between the individual and the state (and army).

As a BDS activist, whose main focus is cultural boycott, I’ve come up against a very common Israeli claim (individuals, small business, and government officials) that “culture has nothing to do with politics”. Most commonly it comes in the form of a puzzled “rhetorical” question: “What does culture have to do with politics?!” As if asking this question closes the discussion, because it’s so obvious that art, music, books, films, theater and dance are a pure form of entertainment that has no intellectual, political, anthropological value. As if cultural products aren’t bought and sold as commodities and status indicators.

Shuki Weiss Promotion and Production Ltd. in the Service of the State of Israel

END_OF_DOCUMENT_TOKEN_TO_BE_REPLACED

Sadly, the historian Eric Hobsbawm has passed away at 95. The following two interviews give a small flavour of his thinking.

END_OF_DOCUMENT_TOKEN_TO_BE_REPLACED

You book some tour, receive some award, get an event invitation. “They love me! They really love me!” you think. Or maybe “Woah, cool! I always wanted to go to Murmansk!” All of a sudden, out of nowhere, you start getting letters from Arizona: “Dude, we’re trying to have a picket line here, you’re seriously treading on our turf! Boycott racism!” Panicked, you call your agent: “But I just wanted to make music!” Your agent, being payed to be in contact with the corporeal world tells you how it is: “We’ll have to loose some revenue, but let’s donate this concert’s proceeds to these people’s organizations!”, better yet “let’s buy activists off with free tickets!” Without much debate, you happily pack your bags and head off in your private airplane to the Congo. After all, what do you know about politics?

END_OF_DOCUMENT_TOKEN_TO_BE_REPLACED

In what is a bitter irony, whilst reaping the PR benefits of association with the 2012 Paralympics, the Dow Chemical Corporation is directly responsible for wave after wave of disability in faraway lands. 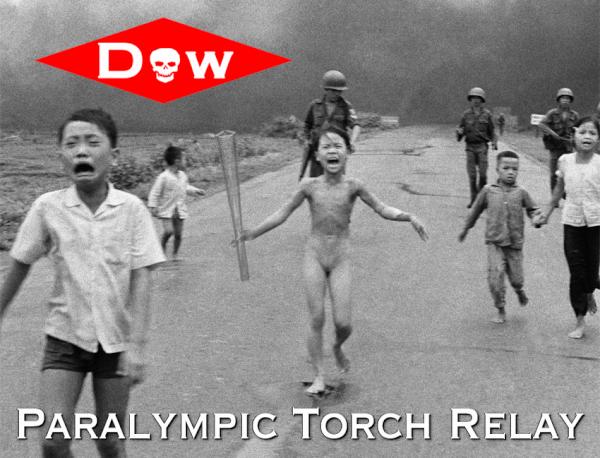 Today begin London’s 2012 Paralympics, set to be opened by the Queen and the Duke of Edinburgh. For another two weeks, we will hear Lord Sebastian Coe and other LOCOG officials’ lofty statements not just about the games’ alleged spirit of inclusiveness but also about their role in the empowerment of disabled people and the challenging of misconceptions around disability. Such pomp and pageantry however, is disingenuous to its core, something recognised by many disability rights campaigners.

As many have noted, from McDonalds and Coca-Cola, partly responsible for obesity epidemics worldwide, to British Petroleum, notorious for off-shore drilling and funding climate change denial, the list of sponsors leaves one bewildered.

END_OF_DOCUMENT_TOKEN_TO_BE_REPLACED Last month, Stuart Jeffries writing in the Guardian, observed, “Capitalism is in crisis across the globe – but what on earth is the alternative?” In 1840, Orestes Brownson in his essay “The Laboring Classes,” asked the same question, “…what shall government do? … Its first doing must be an undoing. … We want first the legislation which shall free the government, whether State of Federal, from the control of the Banks. … a banking system like ours, if sustained, necessarily and inevitably becomes the real and efficient government of the country.” How ironic that 172 years ago, only 49 years after the adoption of the Bill of Rights, Brownson notes, “… at the end of ten years (of) constant hostility, (we know) all too well the power of the Banks, and their fatal influence on the political action of the community.” He declares further that “uncompromising hostility” against the banking system should be the motto of every working man, and of “every friend of humanity.”

Brownson’s “Laboring Classes” is a call to action, virtually at the inception of the country, to put the control of the government back in the hands of the people. “The system must be destroyed….The system is at war with the rights and interest of labor, and it must go.” How ironic Jeffries’ observation of the current state of affairs when contrasted to that of Brownson.

“Today, 164 years after Marx and Engels wrote about grave-diggers, the truth is almost the exact opposite. The proletariat, far from burying capitalism, are keeping it on life support. Overworked, underpaid workers ostensibly liberated by the largest socialist revolution in history (China’s) are driven to the brink of suicide to keep those in the west playing with their iPads. Chinese money bankrolls an otherwise bankrupt America.”